Learn about the Psychedelic Investment Space

Hosted at The Library 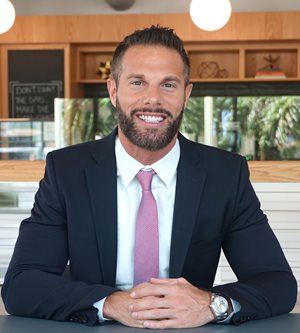 Dustin Robinson is the Founding Partner of Mr. Cannabis Law – a full-service law firm exclusively focused on cannabis and psychedelic industries. Robinson is licensed in Florida as an Attorney, a Certified Public Accountant, and a Real Estate Agent. He focuses his practice on providing legal, accounting, financial, and business consultation to various businesses operating in the hemp, marijuana, and psychedelic industries.

Robinson is deeply involved in the cannabis industry through his law firm – Mr. Cannabis Law – and various cannabis-related organizations, including CannabisLAB, ASTM D-37 Global Standards for Cannabis, Leafstyle360, and Broward County Medical Marijuana Advisory Board. Robinson also serves as the Legal Director for NORML of Palm Beach; he is on the Legal Committee for the Florida Hemp Council; and he is on the Operations Sub-committee for Hemp Industries Association. As a member of the Board of Directors of Minorities for Medical Marijuana, Robinson advocates for social equity and inclusion in the cannabis industry.

Robinson is also the co-founder of Mr. Psychedelic Law – a 501(c)(4) focused on using medical and spiritual research to drive responsible legal reform in Florida for psilocybin mushrooms and other entheogens. Robinson has drafted Resolutions for psychedelic decriminalization for various cities in Florida and hopes to build a responsible legal framework in Florida for the commercialization of psilocybin mushroom and other entheogens. Robinson has built a team at Mr. Psychedelic Law that consists of the top lawyers, lobbyist, doctors, scientists, and spiritual leaders in the state of Florida. Robinson is also represents various psychedelic non-profits including Mind Army and Ketamine Fund.

In April 2021, in partnership with seasoned private equity investor Robert Velarde, Robinson launched Iter Investments, a venture capital firm that aims to deploy capital primarily in businesses operating in and around the burgeoning psychedelics industry.

Robinson drafted and filed the Florida Psilocybin Legalization Bill, together with Florida State Representative Michael Grieco. He was also recognized as “100 Most Influential People in Psychedelics” by Psychedelic Invest.

He created a monthly psychedelics panel that takes place at Soho Beach House Miami on the second Tuesday of every month. Moderated by Robinson, each panel features experts in the psychedelics space from CEOs, doctors, lawyers and celebrities. Robinson kicked off the first event of the series in July 2021 with NBA Champion Lamar Odom and “psychedelic concierge to the stars” Michael ‘Zappy’ Zapolin.

Robinson has been regularly profiled and featured as an expert in the media, including in Bloomberg News, INSIDER, Dazed, Forbes, VICE, The Florida Bar, The Miami Herald, The Sun Sentinel, The Wall Street Journal, Authority Magazine, Thrive Global, Benzinga, StratCann and more.

He has led panels and presentations on cannabis and psychedelics at global industry events, including the PsyTech Summit, CBC Chatter by Coldwell Banker Commercial, and CanEx Jamaica Business Conference & Expo.

A feast of intoxicating flavors and healthy sensibilities, a grab-and-go before meeting friends and colleagues in Cherry Creek, an end-of-the-day toast while enjoying live music. The options at our new restaurants in Denver have something for everyone and anyone, anytime.

Fill out the form below to contact our Sales team.

We use cookies on our website to give you the most relevant experience by remembering your preferences and repeat visits. By clicking “Accept”, you consent to the use of ALL the cookies.
Do not sell my personal information.
Cookie SettingsAccept
Manage consent

This website uses cookies to improve your experience while you navigate through the website. Out of these, the cookies that are categorized as necessary are stored on your browser as they are essential for the working of basic functionalities of the website. We also use third-party cookies that help us analyze and understand how you use this website. These cookies will be stored in your browser only with your consent. You also have the option to opt-out of these cookies. But opting out of some of these cookies may affect your browsing experience.
Necessary Always Enabled
Necessary cookies are absolutely essential for the website to function properly. These cookies ensure basic functionalities and security features of the website, anonymously.
Functional
Functional cookies help to perform certain functionalities like sharing the content of the website on social media platforms, collect feedbacks, and other third-party features.
Performance
Performance cookies are used to understand and analyze the key performance indexes of the website which helps in delivering a better user experience for the visitors.
Analytics
Analytical cookies are used to understand how visitors interact with the website. These cookies help provide information on metrics the number of visitors, bounce rate, traffic source, etc.
Advertisement
Advertisement cookies are used to provide visitors with relevant ads and marketing campaigns. These cookies track visitors across websites and collect information to provide customized ads.
Others
Other uncategorized cookies are those that are being analyzed and have not been classified into a category as yet.
SAVE & ACCEPT